A person with aphasia may suffer from impairment to particular components of language, corresponding to the location of the brain injury in the individual.

Aphasia Classification Chart based on Fluency, Comprehension, and Repetition 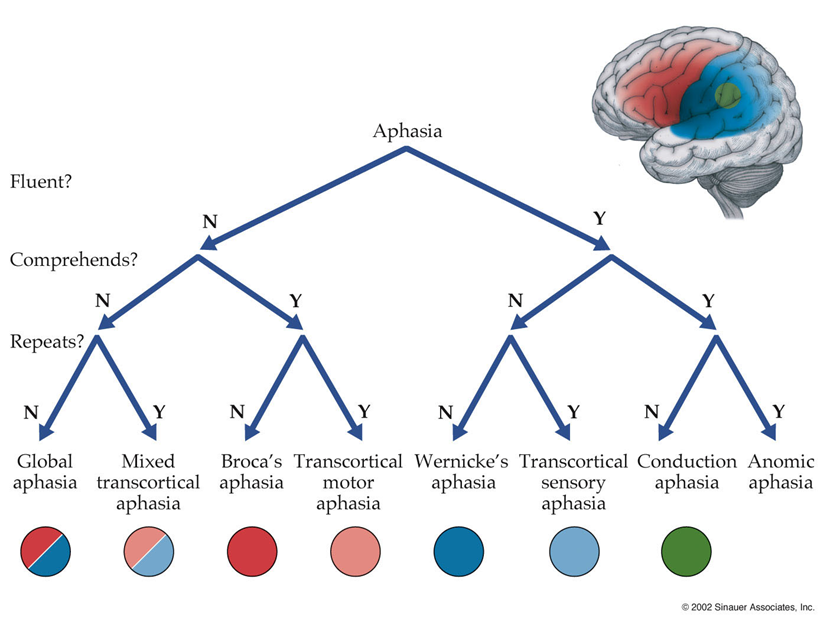 These are the definitions of the different types of aphasia, according to the National Aphasia Association (USA):

This is the most severe form of aphasia, and is applied to patients who can produce few recognizable words and understand little or no spoken language. Persons with Global Aphasia can neither read nor write. Global aphasia may often be seen immediately after the patient has suffered a stroke and it may rapidly improve if the damage has not been too extensive. However, with greater brain damage, severe and lasting disability may result.

In this form of aphasia, speech output is severely reduced and is limited mainly to short utterances of less than four words. Vocabulary access is limited and the formation of sounds by persons with Broca’s aphasia is often laborious and clumsy. The person may understand speech relatively well and be able to read, but be limited in writing. Broca’s aphasia is often referred to as a “non fluent aphasia” because of the halting and effortful quality of speech.

This term is applied to patients who have sparse and effortful speech, resembling severe Broca’s aphasia. However, unlike persons with Broca’s aphasia, they remain limited in their comprehension of speech and do not read or write beyond an elementary level.

In this form of aphasia the ability to grasp the meaning of spoken words is chiefly impaired, while the ease of producing connected speech is not much affected. Therefore Wernicke’s aphasia is referred to as a “fluent aphasia”. However, speech is far from normal. Sentences do not hang together and irrelevant words intrude – sometimes to the point of jargon, in severe cases. Reading and writing are often severely impaired.

This term is applied to persons who are left with a persistent inability to supply the words for the very things they want to talk about – particularly the significant nouns and verbs. As a result their speech, while fluent in grammatical form and output is full of vague circumlocutions and expressions of frustration. They understand speech well, and in most cases, read adequately. Difficulty finding words is as evident in writing as in speech.

Primary Progressive Aphasia (PPA) is a neurological syndrome in which language capabilities become slowly and progressively impaired. Unlike other forms of aphasia that result from stroke or brain injury, PPA is caused by neurodegenerative diseases, such as Alzheimer’s Disease or Frontotemporal Lobar Degeneration. PPA results from deterioration of brain tissue important for speech and language. Although the first symptoms are problems with speech and language, other problems associated with the underlying disease, such as memory loss, often occur later.

In addition to the foregoing syndromes that are seen repeatedly by speech clinicians, there are many other possible combinations of deficits that do not exactly fit into these categories.Some of the components of a complex aphasia syndrome may also occur in isolation. This may be the case for disorders of reading (alexia) or disorders affecting both reading and writing (alexia and agraphia), following a stroke. Severe impairments of calculation often accompany aphasia, yet in some instances patients retain excellent calculation in spite of the loss of language.

How to communicate with a person with aphasia 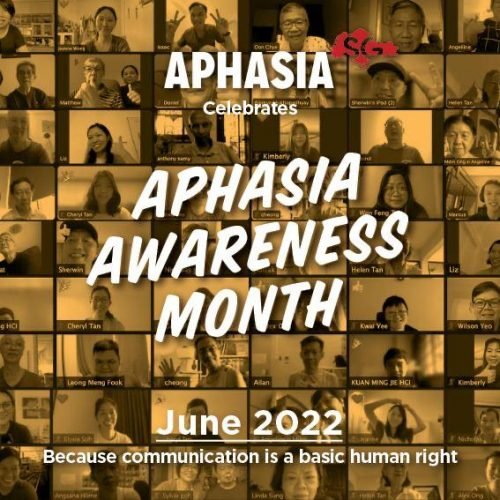